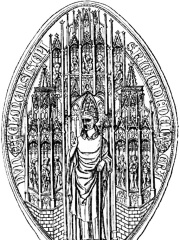 Richard de Bury (24 January 1287 – 14 April 1345), also known as Richard Aungerville or Aungervyle, was an English priest, teacher, bishop, writer, and bibliophile. He was a patron of learning and one of the first English collectors of books. He is chiefly remembered for his Philobiblon, written to inculcate in the clergy the pursuit of learning and the love of books. Read more on Wikipedia

Among religious figures, Richard de Bury ranks 1,639 out of 2,272. Before him are Bernardino López de Carvajal, Theodore of Tarsus, Anna Wierzbicka, Abraham a Sancta Clara, Ignatius IV of Antioch, and Innocent of Alaska. After him are Hans Hermann Groër, Jeralean Talley, Benjamin I of Constantinople, Nirmala Srivastava, Karekin I, and Ricardo María Carles Gordó.