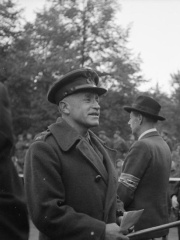 General Sir Richard Nugent O'Connor, (21 August 1889 – 17 June 1981) was a senior British Army officer who fought in both the First and Second World Wars, and commanded the Western Desert Force in the early years of the Second World War. He was the field commander for Operation Compass, in which his forces destroyed a much larger Italian army – a victory which nearly drove the Axis from Africa, and in turn, led Adolf Hitler to send the Afrika Korps under Erwin Rommel to try to reverse the situation. O'Connor was captured by a German reconnaissance patrol during the night of 7 April 1941 and spent over two years in an Italian prisoner of war camp. Read more on Wikipedia

Since 2007, the English Wikipedia page of Richard O'Connor has received more than 154,008 page views. His biography is available in 22 different languages on Wikipedia making him the 992nd most popular military personnel.

Among MILITARY PERSONNELS In India