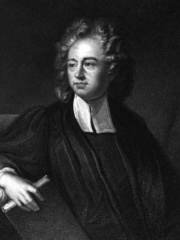 Richard Bentley FRS (; 27 January 1662 – 14 July 1742) was an English classical scholar, critic, and theologian. Considered the "founder of historical philology", Bentley is widely credited with establishing the English school of Hellenism. In 1892, A. E. Housman called Bentley "the greatest scholar that England or perhaps that Europe ever bred". Bentley's Dissertation upon the Epistles of Phalaris, published in 1699, proved that the letters in question, supposedly written in the 6th century BCE by the Sicilian tyrant Phalaris, were actually a forgery produced by a Greek sophist in the 2nd century CE. Read more on Wikipedia

Among writers, Richard Bentley ranks 4,558 out of 5,755. Before him are Melissa Mathison, Henry of Huntingdon, Paul Egede, Jacques Roubaud, Peter Carey, and Gyula Illyés. After him are Fedir Bohatyrchuk, Adalbero of Reims, Kenjirō Tokutomi, Elizabeth Bowen, Karl Leberecht Immermann, and Jacky Liew.