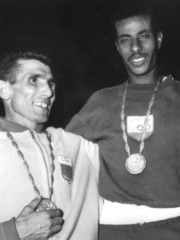 Rhadi Ben Abdesselam (Arabic: راضي بن عبد السلام‎; 28 February 1929 – 4 October 2000) was a Moroccan long-distance runner. He competed at the 1960 Olympics in the marathon and 10,000 meters events.He also ran in the International Cross Country Championships in 1958–1963. In March 1960, he and Belgium's Gaston Roelants quickly broke away from the field, and he became the first African athlete to win the individual gold medal in that event, defeating Roelants by 40 yards.On September 8, 1960, he finished in 14th place in the finals-only 10,000 meters, in 29:32.0, almost a minute behind the winner, the Soviet Union's Pyotr Bolotnikov, who broke the Olympic record for the event.Just two days later, the blazing pace through the first 20 kilometers in the marathon helped result in an eventual world record for the barefoot winner, Ethiopia's Abebe Bikila. Read more on Wikipedia

Among ATHLETES In Morocco