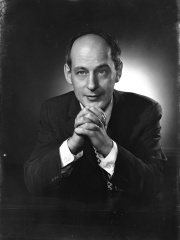 René Lévesque ([ʁœne leˈvaɪ̯k] (listen); August 24, 1922 – November 1, 1987) was a Canadian politician and journalist who served as the 23rd premier of Quebec from 1976 to 1985. He was the first Québécois political leader since Confederation to attempt, through a referendum, to negotiate the political independence of Quebec. Starting his career as a reporter, and radio and television host, he later became known for his eminent role in Quebec's nationalization of hydro, and as an ardent defender of Quebec sovereignty. Read more on Wikipedia

Among politicians, René Lévesque ranks 9,866 out of 15,710. Before him are Lucius Cassius Longinus, Dean Barrow, Mátyás Szűrös, Tosiwo Nakayama, Arthur Griffith, and Wu Bangguo. After him are Abas I of Armenia, Károly Huszár, Dirk VI, Count of Holland, Petar Stoyanov, Prince Francis Joseph of Battenberg, and Raúl Alberto Lastiri.