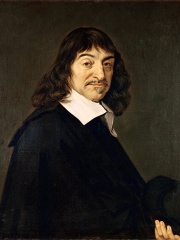 René Descartes ( or UK: ; French: [ʁəne dekaʁt] (listen); Latinized: Renatus Cartesius; 31 March 1596 – 11 February 1650) was a French-born philosopher, mathematician, and scientist who spent a large portion of his working life in the Dutch Republic, initially serving the Dutch States Army of Maurice of Nassau, Prince of Orange and the Stadtholder of the United Provinces. One of the most notable intellectual figures of the Dutch Golden Age, Descartes is also widely regarded as one of the founders of modern philosophy. Many elements of Descartes's philosophy have precedents in late Aristotelianism, the revived Stoicism of the 16th century, or in earlier philosophers like Augustine. Read more on Wikipedia

René Descartes is most famous for his philosophical statement, "I think, therefore I am."

Among philosophers, René Descartes ranks 7 out of 1,089. Before him are Aristotle, Plato, Socrates, Confucius, Gautama Buddha, and Immanuel Kant. After him are Avicenna, Jean-Jacques Rousseau, Friedrich Nietzsche, Niccolò Machiavelli, Augustine of Hippo, and John Locke.