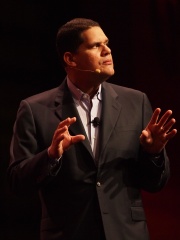 Reginald Fils-Aimé ( FEE-sə-may; born March 25, 1961) is an American businessman, most recognized as the former president and chief operating officer of Nintendo of America, the North American division of the Japanese video game company Nintendo, from 2006 to 2019, succeeding Tatsumi Kimishima. Prior to his promotion to president and COO, Fils-Aimé was Executive Vice President of Sales and Marketing. Fils-Aimé gained celebrity status among gamers following his appearance at Nintendo's E3 2004 press conference in May 2004, and helped to revitalize Nintendo's image as a major contender among the other video game console makers, Sony Interactive Entertainment and Microsoft. Read more on Wikipedia