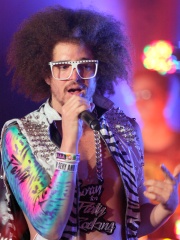 Stephen Kendal Gordy (born September 3, 1975), better known by his stage name Redfoo, is an American rapper, singer, composer, dancer, record producer and DJ best known for being part of the musical duo LMFAO, and for their hit song, "Party Rock Anthem". Redfoo formed the duo with his nephew, Sky Blu, in 2006. They released two studio albums before Redfoo went solo in 2013. Read more on Wikipedia

Page views of Redfoos by language

Among singers, Redfoo ranks 1,627 out of 3,541. Before him are Joey Belladonna, Billy Fury, Tones and I, Ol' Dirty Bastard, Alesha Dixon, and Rakim. After him are Benjamin Biolay, Grimes, Origa, Andrea Berg, Siti Nurhaliza, and Demet Akalın.