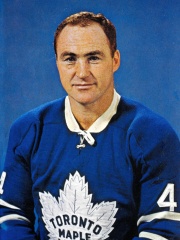 Leonard Patrick "Red" Kelly (July 9, 1927 – May 2, 2019) was a Canadian professional ice hockey player and coach. He was also a Liberal Member of Parliament for the Toronto-area riding of York West from 1962 to 1965, during which time he also won the Stanley Cup—twice—while actively playing for the Toronto Maple Leafs. Kelly played on more Stanley Cup-winning teams (eight) than any other player who never played for the Montreal Canadiens; Henri Richard (11), Jean Beliveau (10), Yvan Cournoyer (10) and Claude Provost (9) won their Cups with the Canadiens. Read more on Wikipedia

Since 2007, the English Wikipedia page of Red Kelly has received more than 283,939 page views. His biography is available in 15 different languages on Wikipedia. Red Kelly is the 14,452nd most popular politician.