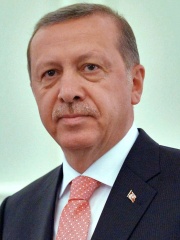 Recep Tayyip Erdoğan (UK: AIR-də-wan, US: -⁠wahn; Turkish: [ɾeˈdʒep tajˈjip ˈæɾdoaan] (listen); born 26 February 1954) is a Turkish politician serving as the current President of Turkey. He previously served as Prime Minister of Turkey from 2003 to 2014 and as Mayor of Istanbul from 1994 to 1998. He founded the Justice and Development Party (AKP) in 2001, leading it to election victories in 2002, 2007, and 2011 before being required to stand down upon his election as President in 2014. Read more on Wikipedia

Since 2007, the English Wikipedia page of Recep Tayyip Erdoğan has received more than 7,666,312 page views. His biography is available in 120 different languages on Wikipedia making him the 129th most popular politician.

Among politicians, Recep Tayyip Erdoğan ranks 128 out of 14,801. Before him are Maximilian I, Holy Roman Emperor, Kösem Sultan, Uthman, Abdul Hamid II, Akbar, and Otto I, Holy Roman Emperor. After him are Gustavus Adolphus of Sweden, Bayezid II, Mark Antony, Deng Xiaoping, Simón Bolívar, and Mustafa I.