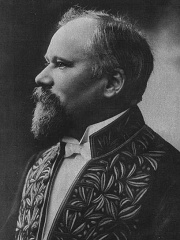 Raymond Nicolas Landry Poincaré (UK: [US: stress final syllable], French: [ʁɛmɔ̃ pwɛ̃kaʁe]; 20 August 1860 – 15 October 1934) was a French statesman who served three times as 58th Prime Minister of France, and as President of France from 1913 to 1920. Trained in law, Poincaré was elected as a Deputy in 1887 and served in the cabinets of Dupuy and Ribot. In 1902, he co-founded the Democratic Republican Alliance, the most important centre-right party under the Third Republic, becoming Prime Minister in 1912 and serving as President of the Republic from 1913 to 1920. He purged the French government of all opponents and critics and single-handedly controlled French foreign policy from 1912 to the beginning of World War I. Read more on Wikipedia

Among politicians, Raymond Poincaré ranks 943 out of 15,710. Before him are Otto IV, Holy Roman Emperor, Wenceslaus IV of Bohemia, Constantine V, Rani of Jhansi, Otto II, Holy Roman Emperor, and Basil II. After him are Pepin of Herstal, Ælfweard of Wessex, Archduchess Gisela of Austria, Maurice, Prince of Orange, William Henry Harrison, and Christian VIII of Denmark.