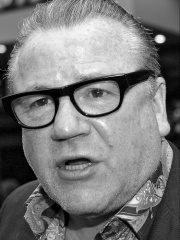 Raymond Andrew Winstone (; born 19 February 1957) is an English television, stage and film actor with a career spanning five decades. Having worked with many prominent directors, including Martin Scorsese and Steven Spielberg, and starring alongside the likes of Leonardo DiCaprio, Angelina Jolie and Mel Gibson, Winstone is perhaps best known for his "hard man" roles (usually delivered in his distinctive London accent). The first of these was the character Carlin in Scum, the 1979 film remake of a BBC television play in which Winstone had originated the role, and which was not broadcast due to its violent nature. Read more on Wikipedia