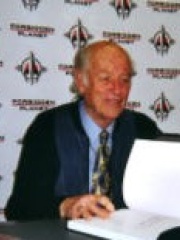 Raymond Frederick Harryhausen (June 29, 1920 – May 7, 2013) was an American artist, designer, visual effects creator, writer and producer who created a form of stop motion model animation known as "Dynamation".His works include the animation for Mighty Joe Young (1949), with his mentor Willis H. O'Brien, for which he won the Academy Award for Best Visual Effects; his first color film, The 7th Voyage of Sinbad (1958); and Jason and the Argonauts (1963), which featured a sword fight with seven skeleton warriors. His last film was Clash of the Titans (1981), after which he retired. Harryhausen moved to the United Kingdom, became a dual American-British citizen and lived in London from 1960 until his death in 2013. Read more on Wikipedia

Since 2007, the English Wikipedia page of Ray Harryhausen has received more than 859,751 page views. His biography is available in 33 different languages on Wikipedia making him the 316th most popular film director.