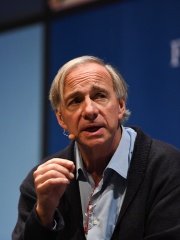 Raymond Thomas Dalio (born August 8, 1949) is an American billionaire investor and hedge fund manager, who has served as co-chief investment officer of the world's largest hedge fund, Bridgewater Associates, since 1985. He founded Bridgewater in 1975 in New York. Within ten years, it was infused with a $5 million investment from the World Bank's retirement fund. Dalio is regarded as one of the greatest innovators in the finance world, having popularized many commonly used practices, such as risk parity, currency overlay, portable alpha and global inflation-indexed bond management.Dalio was born in New York City, and attended C.W. Read more on Wikipedia