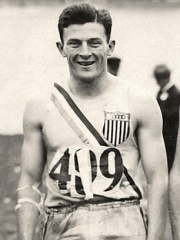 Raymond James Barbuti (June 12, 1905 – July 8, 1988) was an American football player and sprint runner who won two gold medals at the 1928 Summer Olympics. In 1924 while playing fullback at Lawrence, Long Island, New York high school, Barbuti set a New York state record, which still stands (2013), scoring eight touchdowns in one game. He attended Syracuse University, where he won the IC4A championship in the 400 m sprint in 1928 in a time of 48.8 seconds. Read more on Wikipedia

Since 2007, the English Wikipedia page of Ray Barbuti has received more than 24,061 page views. His biography is available in 15 different languages on Wikipedia making him the 538th most popular athlete.