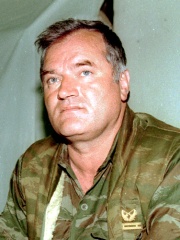 Ratko Mladić (Serbian Cyrillic: Ратко Младић, pronounced [râtko mlǎːdit͡ɕ]; born 12 March 1942) is a convicted war criminal and a Bosnian Serb colonel-general who led the Army of Republika Srpska (VRS) during the Yugoslav Wars. In 2017, he was found guilty of committing war crimes, crimes against humanity, and genocide by the International Criminal Tribunal for the former Yugoslavia (ICTY). A long-time member of the League of Communists of Yugoslavia, Mladić began his career in the Yugoslav People's Army (JNA) in 1965. Read more on Wikipedia

Ratko Mladić is most famous for being the military leader of the Bosnian Serb Army during the Bosnian War. He was indicted for war crimes and genocide by the International Criminal Tribunal for the former Yugoslavia (ICTY) in 1995.

Among MILITARY PERSONNELS In Bosnia and Herzegovina