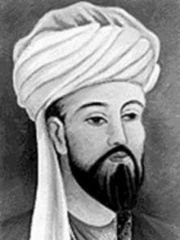 Rashid al-Din Sinan (Arabic: رشيد الدين سنان Rashīd ad-Dīn Sinān; 1131/1135 – 1193) also known as the Old Man of the Mountain (Arabic: شيخ الجبل Shaykh al-Jabal, Latin: Vetulus de Montanis), was a da'i (missionary) and leader of the Syrian branch of the Nizari Isma'ili state (the Assassin Order) from 1162 until his death in 1193. Read more on Wikipedia

Rashid ad-din sinan was a Kurdish general and architect who served the Ottoman Empire during the 14th century. He is most famous for building the Selimiye Mosque in Edirne.

Among people born in 1130, Rashid ad-Din Sinan ranks 10. Before him are Saint Rosalia, Baldwin III of Jerusalem, Toghrul, Géza II of Hungary, Benjamin of Tudela, and Charles VII of Sweden. After him are Magnus II of Sweden, Akka Mahadevi, Theobald V, Count of Blois, Eustace IV, Count of Boulogne, Euphrosyne of Kiev, and Saint Meinhard. Among people deceased in 1192, Rashid ad-Din Sinan ranks 3. Before him are Conrad of Montferrat and Kilij Arslan II. After him are Emperor Go-Shirakawa, Hugh III, Duke of Burgundy, Garnier de Nablus, Wenceslaus II, Duke of Bohemia, Adam of Saint Victor, and Orio Mastropiero.

Among SOCIAL ACTIVISTS In Iraq