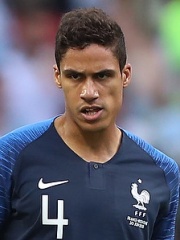 Raphaël Xavier Varane (French pronunciation: ​[ʁafaɛl vaʁan]; born 25 April 1993) is a French professional footballer who plays as a centre-back for Spanish club Real Madrid and the France national team.He previously played for French club Lens and, ahead of the 2010–11 season, began training with the senior team and appeared on the bench in several league matches. Varane made his professional debut in 2010 aged 17, in a league match against Montpellier. Read more on Wikipedia

Since 2007, the English Wikipedia page of Raphaël Varane has received more than 2,507,225 page views. His biography is available in 64 different languages on Wikipedia making him the 1,117th most popular soccer player.