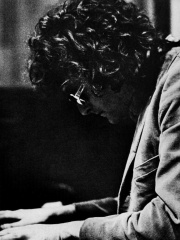 Randall Stuart Newman (born November 28, 1943) is an American singer-songwriter, arranger, composer, and pianist known for his Southern-accented singing style, early Americana-influenced songs (often with mordant or satirical lyrics), and various film scores. His best-known songs as a recording artist are "Short People" (1977), "I Love L.A." (1983), and "You've Got a Friend in Me" (1995), while other artists have enjoyed more success with cover versions of his "Mama Told Me Not to Come" (1966), "I Think It's Going to Rain Today" (1968) and "You Can Leave Your Hat On" (1972). Born in Los Angeles to an extended family of Hollywood film composers, Newman began his songwriting career at the age of 17, penning hits for acts such as the Fleetwoods, Cilla Black, Gene Pitney, and the Alan Price Set. Read more on Wikipedia