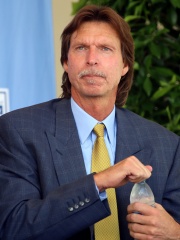 Randall David Johnson (born September 10, 1963), nicknamed "The Big Unit", is an American photographer and former professional baseball pitcher who played 22 seasons in Major League Baseball (1988–2009) for six teams, primarily the Seattle Mariners and Arizona Diamondbacks. At 6 ft 10 in (2.08 m), Johnson was the tallest player in MLB history when he entered the league: a factor that contributed to his extremely intimidating persona and pitching style. He is particularly known for his overpowering fastball and devastating slider, a combination which remained effective throughout his lengthy career. Read more on Wikipedia