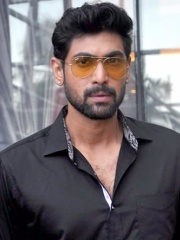 Ramanaidu "Rana" Daggubati (born 14 December 1984) is an Indian film actor, producer, television personality, visual effects co-ordinator, and an entrepreneur known primarily for his work in Telugu language films, as well as for his work in Hindi and Tamil language films.His stint in the film industry began with him working as a visual effects coordinator in around 70 films. And before he turned actor, he started his own production company, Spirit Media. He produced a National Award-winning film and then forayed into acting in 2010.He made his acting debut with the Telugu blockbuster Leader, for which he won the Filmfare Award for Best Male Debut – South. Read more on Wikipedia

Since 2007, the English Wikipedia page of Rana Daggubati has received more than 7,817,979 page views. His biography is available in 19 different languages on Wikipedia making him the 8,624th most popular actor.