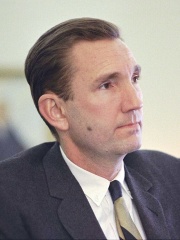 William Ramsey Clark (born December 18, 1927) is an American lawyer, activist and former federal government official. A progressive, New Frontier liberal, he occupied senior positions in the United States Department of Justice under Presidents John F. Kennedy and Lyndon B. Johnson, notably serving as United States Attorney General from 1967 to 1969; previously he was Deputy Attorney General from 1965 to 1967 and Assistant Attorney General from 1961 to 1965. As attorney general, he was known for his vigorous opposition to the death penalty, his aggressive support of civil liberties and civil rights, and his dedication in enforcing antitrust provisions. Read more on Wikipedia

Since 2007, the English Wikipedia page of Ramsey Clark has received more than 448,810 page views. His biography is available in 15 different languages on Wikipedia making him the 12,431st most popular politician.