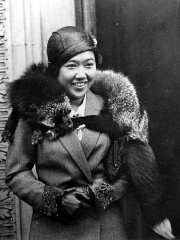 Since 2007, the English Wikipedia page of Rambai Barni has received more than 51,828 page views. Her biography is available in 17 different languages on Wikipedia making her the 550th most popular companion.

Among companions, Rambai Barni ranks 556 out of 586. Before her are Gilbert, Duke of Lorraine, Goiswintha, Blanca of Navarre, Queen of Castile, Iset Ta-Hemdjert, Mariniana, and Lanassa. After her are Keratsa of Bulgaria, Joan, Countess of Ponthieu, Anabella Drummond, Nicole Brown Simpson, Zenobia of Armenia, and Æthelred, Lord of the Mercians.

Among COMPANIONS In Thailand

Among companions born in Thailand, Rambai Barni ranks 1. After her are Suthida (1978).