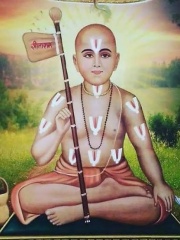 Ramananda (IAST: Rāmānanda) was a 14th-century Vaishnava devotional poet saint, who lived in the Gangetic basin of northern India. The Hindu tradition recognizes him as the founder of the Ramanandi Sampradaya, the largest monastic Hindu renunciant community in modern times.Born in a Brahman family, Ramananda for the most part of his life lived in the holy city of Varanasi. His year of birth or death are uncertain, but historical evidence suggests he was one of the earliest saints and a pioneering figure of the Bhakti movement as it rapidly grew in north India, sometime between the 14th and mid 15th century during its Islamic rule period. Read more on Wikipedia

Since 2007, the English Wikipedia page of Ramananda has received more than 376,734 page views. His biography is available in 15 different languages on Wikipedia making him the 923rd most popular philosopher.

Page views of Ramanandas by language

Among people born in 1400, Ramananda ranks 23. Before him are Didacus of Alcalá, John, Constable of Portugal, Gonçalo Velho Cabral, Hüma Hatun, Irene Asanina, and Charles I of Albret. After him is Richard Neville, 5th Earl of Salisbury.