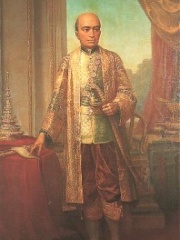 Phra Phutthaloetla Naphalai (Thai: พระพุทธเลิศหล้านภาลัย, 24 February 1767 or 1768 – 21 July 1824), personal name Chim (Thai: ฉิม), also styled as Rama II, was the second monarch of Siam under the Chakri dynasty, ruling from 1809 to 1824. In 1809, Itsarasunthon succeeded his father Rama I, the founder of Chakri dynasty, as Loetlanaphalai the King of Siam. His reign was largely peaceful, devoid of major conflicts. Read more on Wikipedia

Rama II of Siam is most famous for his reforms that helped to modernize the country. He abolished slavery, reformed the tax system, and made education available to all.

Page views of Rama II of Siam by language

Among politicians, Rama II of Siam ranks 4,439 out of 15,577. Before him are Jing Ke, Gaston Thorn, Theodelinda, Andocides, José Gervasio Artigas, and Imi Lichtenfeld. After him are Gitanas Nausėda, Duke Henry of Mecklenburg-Schwerin, Baldwin II, Margrave of Flanders, Aristides Pereira, Alfonso, Duke of Anjou and Cádiz, and Al-Ashraf Qansuh al-Ghuri.