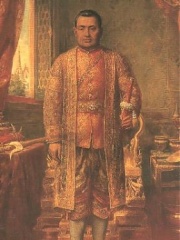 Nangklao (Thai: พระบาทสมเด็จพระนั่งเกล้าเจ้าอยู่หัว, RTGS: Phra Bat Somdet Phra Nangklao Chao Yu Hua; 31 March 1788 – 2 April 1851), birth name Thap (Thai: ทับ), also styled Rama III, was the third king of Siam under the House of Chakri, ruling from 21 July 1824 to 2 April 1851. Nangklao was the eldest surviving son of his predecessor, king Rama II. His mother Sri Sulalai was one of the king's secondary wives. Nangklao was likely designated as heir by his father, his accession was uncontested and smoothly confirmed by the grand council. Read more on Wikipedia

Rama III is most famous for being the king who oversaw the modernization of Siam. He created a new law code, built canals, and established a new capital city.

Among politicians, Rama III ranks 4,251 out of 15,577. Before him are Ferdinand Buisson, Rudolf Slánský, Paul Frederick, Grand Duke of Mecklenburg-Schwerin, Arame of Urartu, Pranab Mukherjee, and Mokjong of Goryeo. After him are Florestan I, Prince of Monaco, Zhu Youlang, Władysław I Herman, Emperor Ningzong, Konrad I of Masovia, and Ye Jianying.