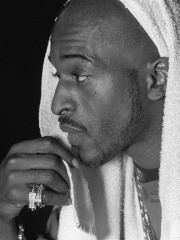 William Michael Griffin Jr. (born January 28, 1968), better known by his stage name Rakim, is an American rapper and record producer. One half of golden age hip hop duo Eric B. & Rakim, he is widely regarded as one of the most influential and most skilled MCs of all time.Rakim is considered a transformational figure in hip hop by raising the bar for MC technique higher than it had ever been. Read more on Wikipedia

Page views of Rakims by language

Among singers, Rakim ranks 1,626 out of 3,541. Before him are Raekwon, Joey Belladonna, Billy Fury, Tones and I, Ol' Dirty Bastard, and Alesha Dixon. After him are Redfoo, Benjamin Biolay, Grimes, Origa, Andrea Berg, and Siti Nurhaliza.