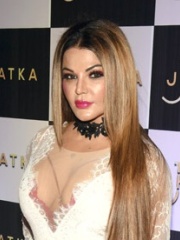 Rakhi Sawant (born Neeru Bheda on 25 November 1978) is an Indian dancer, model, Hindi film and television actress and television talk show host, who has appeared in many Hindi and a few Kannada, Marathi, Odia, Telugu and Tamil films. She has established herself as a sex symbol, and was a contestant on the first season of the controversial Indian reality television series Bigg Boss 1 in 2006.Sawant launched her own political party, headed by Jai Shah, called the Rashtriya Aam Party, to contest the 2014 Lok Sabha Elections. Read more on Wikipedia

Since 2007, the English Wikipedia page of Rakhi Sawant has received more than 3,119,980 page views. Her biography is available in 18 different languages on Wikipedia making her the 220th most popular model.

Among MODELS In India