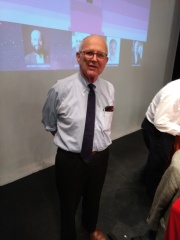 Rainer "Rai" Weiss ( WYSSE, German: [vaɪs]; born September 29, 1932) is an American physicist, known for his contributions in gravitational physics and astrophysics. He is a professor of physics emeritus at MIT and an adjunct professor at LSU. He is best known for inventing the laser interferometric technique which is the basic operation of LIGO. He was Chair of the COBE Science Working Group.In 2017, Weiss was awarded the Nobel Prize in Physics, along with Kip Thorne and Barry Barish, "for decisive contributions to the LIGO detector and the observation of gravitational waves".Weiss has helped realize a number of challenging experimental tests of fundamental physics. Read more on Wikipedia

Rainer Weiss is most famous for being a part of the team that won the Nobel Prize in Physics in 2017. Weiss was one of three people who led the construction of the Laser Interferometer Gravitational-Wave Observatory (LIGO) which detected gravitational waves for the first time in 2016.