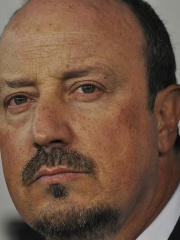 Rafael Benítez Maudes (Spanish pronunciation: [rafaˈel ˈrafa βeˈniteθ ˈmauðes]; born 16 April 1960) is a Spanish professional football manager and former player. He joined Real Madrid's coaching staff at the age of 26, going on to work as the under-19 and reserve team coach, and assistant manager for the senior team. He moved away from Real Madrid in 1995, but management spells at Real Valladolid and Osasuna were short-lived and unsuccessful. Read more on Wikipedia

Since 2007, the English Wikipedia page of Rafael Benítez has received more than 3,613,781 page views. His biography is available in 51 different languages on Wikipedia making him the 81st most popular coach.