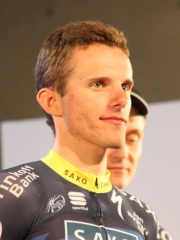 Rafał Majka (Polish pronunciation: [ˈrafaw ˈmajka]; born 12 September 1989) is a Polish professional road bicycle racer, who currently rides for UCI WorldTeam Bora–Hansgrohe. He is known as a strong climber, and rose to prominence at the 2013 Giro d'Italia, where he finished 7th overall, and 6th one year later. Other major achievements are three mountainous stage wins in the Tour de France as well as the Mountains classification in the 2014 and 2016 edition, two stages and the overall victory at the 2014 Tour de Pologne. Read more on Wikipedia

Since 2007, the English Wikipedia page of Rafał Majka has received more than 187,220 page views. His biography is available in 30 different languages on Wikipedia making him the 250th most popular cyclist.

Among CYCLISTS In Poland