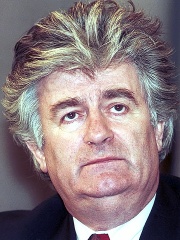 Radovan Karadžić (Serbian Cyrillic: Радован Караџић, pronounced [râdoʋaːn kâradʒitɕ]; born 19 June 1945) is a Bosnian Serb former politician who served as the president of Republika Srpska during the Bosnian War, and was later convicted of genocide, crimes against humanity and war crimes by the International Criminal Tribunal for the former Yugoslavia (ICTY).Trained as a psychiatrist, he co-founded the Serb Democratic Party in Bosnia and Herzegovina and served as the first president of Republika Srpska from 1992 to 1996. He was a fugitive from 1996 until July 2008, after having been indicted for war crimes by the ICTY. The indictment concluded there were reasonable grounds for believing he committed war crimes, including genocide against Bosniak and Croat civilians during the Bosnian War (1992–1995). While a fugitive, he worked at a private clinic in Belgrade, specializing in alternative medicine and psychology, under an alias.He was arrested in Belgrade on 21 July 2008 and brought before Belgrade's War Crimes Court a few days later. Read more on Wikipedia

Among politicians, Radovan Karadžić ranks 402 out of 15,710. Before him are Theodoric the Great, Galerius, Leopold I of Belgium, Miklós Horthy, Orhan, and William III of England. After him are Moctezuma II, Mithridates VI of Pontus, Rüstem Pasha, Charles I of England, Carl Gustaf Emil Mannerheim, and Charles IV of France.