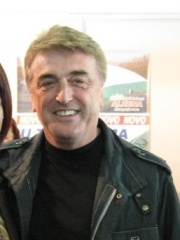 Radomir Antić (Serbian Cyrillic: Радомир Антић, pronounced [rǎdomiːr âːntitɕ]; 22 November 1948 – 6 April 2020) was a Serbian professional football manager and player. Following a 17-year playing career as a defender, most of which he spent playing at Partizan, with whom he won the Yugoslav First League, Antić moved into coaching. He was one of only two men to have managed both Barcelona and Real Madrid, long-time bitter rivals (the other one is Enrique Fernández Viola). Read more on Wikipedia

Since 2007, the English Wikipedia page of Radomir Antić has received more than 363,690 page views. His biography is available in 27 different languages on Wikipedia making him the 346th most popular soccer player.

Among SOCCER PLAYERS In Serbia