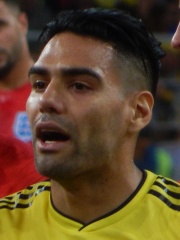 Radamel Falcao García Zárate (born 10 February 1986) is a Colombian professional footballer who plays as a forward for La Liga club Rayo Vallecano and captains the Colombia national team. He is nicknamed "El Tigre" (Spanish for The Tiger) or "King of the Europa League". During his prime, he was regarded as one of the best strikers in the world.Falcao began his professional career in the Colombian Second Division at the age of 13 at Lanceros Boyacá, before moving to the Argentine club River Plate, where he played with their youth academy from 2001 until 2005 and later won the 2007–08 Clausura tournament. Read more on Wikipedia