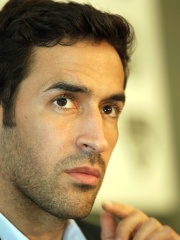 Raúl González Blanco (Spanish pronunciation: [raˈul ɣonˈθaleθ ˈβlaŋko]; born 27 June 1977), known as Raúl, is a Spanish football manager and former player who played as a forward. He is the current manager of Real Madrid Castilla, the reserve team of La Liga club Real Madrid. Raúl is regarded as one of the greatest players of his era.Raúl was born in the San Cristóbal de los Ángeles neighborhood of Madrid where he played for the local youth team before moving to the Atlético Madrid youth team. Read more on Wikipedia

Since 2007, the English Wikipedia page of Raúl has received more than 14,533 page views. His biography is available in 73 different languages on Wikipedia. Raúl is the 250th most popular soccer player (up from 324th in 2019), the 441st most popular biography from Spain (up from 445th in 2019) and the 19th most popular Soccer Player.

Page views of Raúls by language