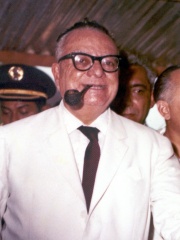 Rómulo Ernesto Betancourt Bello (22 February 1908 – 28 September 1981; Spanish pronunciation: [ˈromulo betaŋˈkuɾ]), known as "The Father of Venezuelan Democracy", was the 47th and 54th President of Venezuela, serving from 1945 to 1948 and again from 1959 to 1964, as well as leader of Acción Democrática, Venezuela's dominant political party in the 20th century. Betancourt, one of Venezuela's most important political figures, led a tumultuous and highly controversial career in Latin American politics. Periods of exile brought Betancourt in contact with various Latin American countries as well as the United States, securing his legacy as one of the most prominent international leaders to emerge from 20th-century Latin America. Read more on Wikipedia

Since 2007, the English Wikipedia page of Rómulo Betancourt has received more than 199,068 page views. His biography is available in 38 different languages on Wikipedia making him the 5,117th most popular politician.

Among politicians, Rómulo Betancourt ranks 5,086 out of 14,801. Before him are Princess Louise of Belgium, Takeda Katsuyori, László Csatáry, Hussain Muhammad Ershad, Phocion, and Tự Đức. After him are Al-Muqanna, Gengshi Emperor, García I of León, Franz Gürtner, Qapaghan Qaghan, and Aristomenes.