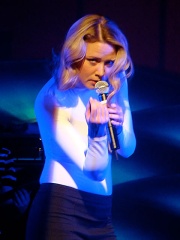 Róisín Marie Murphy (; Irish: [ɾˠoːˈʃiːnʲ]; born 5 July 1973) is an Irish singer-songwriter and record producer. She first became known in the 1990s as one-half of the UK-Irish trip hop duo Moloko with her partner Mark Brydon. After the breakup of Moloko, Murphy embarked on a solo career, releasing her debut solo album, Ruby Blue, written and produced with experimental musician Matthew Herbert, to critical praise in 2005. Read more on Wikipedia

Since 2007, the English Wikipedia page of Róisín Murphy has received more than 996,438 page views. Her biography is available in 26 different languages on Wikipedia making her the 1,535th most popular singer.