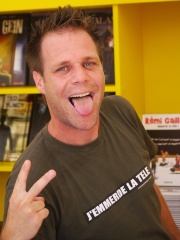 Rémi Gaillard (French pronunciation: ​[ʁemi ɡajaʁ]; born 7 February 1975 in Montpellier, France) is a French prankster who uploads videos on YouTube. As of January 2017, his channel is the 26th most subscribed comedy channel on YouTube.Gaillard gained attention in the French media after performing a series of pranks, including an appearance disguised as a Lorient football player in the 2002 Coupe de France final match, during which he took part in the winners' celebrations and was greeted by then president of the French Republic, Jacques Chirac. Read more on Wikipedia

Since 2007, the English Wikipedia page of Rémi Gaillard has received more than 563,901 page views. His biography is available in 27 different languages on Wikipedia making him the 2nd most popular youtuber.

Among youtubers, Rémi Gaillard ranks 3 out of 13. Before him are PewDiePie and Smosh. After him are Daniel Howell, Pat Condell, Shane Dawson, Marzia Bisognin, Markiplier, Jenna Marbles, Michael Stevens, Zoella, and Ryan Higa.

Among YOUTUBERS In France