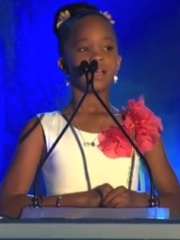 Quvenzhané Wallis ( kwə-VEN-zhə-nay; born August 28, 2003) is an American actress and author. In 2012, she starred as Hushpuppy in the drama film Beasts of the Southern Wild (2012), for which she was nominated for the Academy Award for Best Actress, becoming the youngest actress to be nominated in the category, as well as the first person born in the 21st century nominated for an Oscar, She starred as Annie Bennett in the 2014 adaptation of Annie, for which she received a Golden Globe nomination for Best Actress in a Motion Picture – Comedy or Musical.In 2017, Wallis published two books, Shai & Emmie Star in Break an Egg! and A Night Out with Mama. Read more on Wikipedia