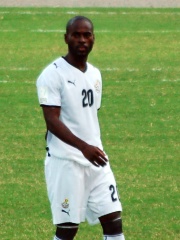 Quincy Jamie Owusu-Abeyie (born 15 April 1986), often known simply as Quincy, is a former professional footballer who plays as a forward or left winger for Dutch amateur club SV Robinhood. Quincy is also a rapper, who goes by the name BLOW. He began his career with Ajax before moving to Arsenal as a 16-year-old. He went on to play for clubs in a variety of countries: Spartak Moscow of the Russian Premier League, Spanish clubs Celta Vigo and Málaga, Birmingham City, Cardiff City and Portsmouth in the English leagues, Al-Sadd of Qatar, Superleague Greece club Panathinaikos, Boavista of Portugal, and most recently in his native Netherlands with NEC. Quincy played international football for his country of birth at youth level, but in 2007 requested to become eligible to represent his parents' country, Ghana, instead. Read more on Wikipedia