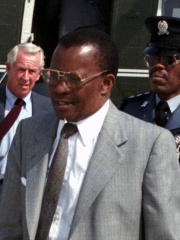 Sir Ketumile Quett Joni Masire, GCMG (24 July 1926 – 22 June 2017) was the second President of Botswana, in office from 1980 to 1998. He was honored with the Knighthood of the Grand Cross of Saint Michael and Saint George by Her Majesty the Queen Elizabeth II in 1990. He was a leading figure in the independence movement and then the new government, and played a crucial role in facilitating and protecting Botswana's steady financial growth and development. Read more on Wikipedia

Among politicians, Quett Masire ranks 6,945 out of 15,710. Before him are Sicco Mansholt, Emperor Shizong of Liao, Antonio de Mendoza, Thibaw Min, George I of Bulgaria, and Princess Marie Louise of Bulgaria. After him are Bonne of Artois, Junio Valerio Borghese, Tiberius Coruncanius, Afonso I, Duke of Braganza, Bohemond VI of Antioch, and Richard de Bures.

Others born in Botswana

Among POLITICIANS In Botswana

Among politicians born in Botswana, Quett Masire ranks 2. Before him are Seretse Khama (1921). After him are Festus Mogae (1939) and Mokgweetsi Masisi (1961).