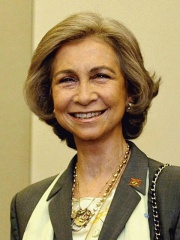 Sofía (born 2 November 1938) is a member of the Spanish royal family, who was Queen of Spain from 1975 to 2014 as the wife of King Juan Carlos I. Born Princess Sophia of Greece and Denmark (Greek: Σοφία), she is the first child of King Paul of Greece and Frederica of Hanover. As her family was forced into exile during the Second World War, she spent part of her childhood in Egypt, returning to Greece in 1946. Read more on Wikipedia

Queen Sofía of Spain is most famous for her marriage to King Juan Carlos I. She was born in Athens, Greece, and she is the daughter of King Paul of Greece and Queen Frederica of Greece.

Page views of Queen Sofía of Spains by language

Among noblemen, Queen Sofía of Spain ranks 35 out of 843. Before her are Charles the Bold, Diana, Princess of Wales, Margaret of Valois, Alexander Nevsky, Marie de' Medici, and Rainier III, Prince of Monaco. After her are Ramesses III, Princess Beatrice of the United Kingdom, Henry IV of England, Otto von Habsburg, Ludovico Sforza, and Naruhito.

Among people born in 1938, Queen Sofía of Spain ranks 9. Before her are Romy Schneider, Beatrix of the Netherlands, Claudia Cardinale, Rudolf Nureyev, Adriano Celentano, and Jon Voight. After her are Farah Pahlavi, Christopher Lloyd, Nico, Jerry Brown, Anthony Giddens, and Alberto Fujimori.

Among NOBLEMEN In Greece