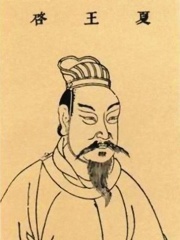 Qi (Chinese: 啓) was a Chinese king, the son of Yu the Great and the second sovereign of the Xia dynasty. Read more on Wikipedia

Since 2007, the English Wikipedia page of Qi of Xia has received more than 58,382 page views. His biography is available in 27 different languages on Wikipedia making him the 2,834th most popular politician.

Page views of Qi of Xias by language

Among politicians, Qi of Xia ranks 2,816 out of 14,801. Before him are Princess Benedikte of Denmark, Prince George of Denmark, Nguyễn Phú Trọng, Frederick II, Duke of Austria, Basarab I of Wallachia, and Charles VII of Sweden. After him are Emperor Go-Kashiwabara, Lee Teng-hui, Hamad bin Isa Al Khalifa, Artavasdes II of Armenia, Liu Bian, and Yitzhak Navon.