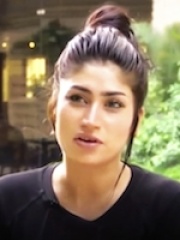 Fouzia Azeem (Urdu: فوزیہ عظیم‎; 1 March 1990 – 15 July 2016), known by her stage name Qandeel Baloch (Urdu: قندیل بلوچ‎), was a Pakistani model, actress, social media celebrity and activist. Azeem rose to prominence due to her videos on social networks discussing her daily routine, her rights as a Pakistani woman, and various controversial issues.Baloch first received recognition from the media in 2013, when she auditioned for Pakistan Idol; her audition became popular and she became an Internet celebrity. She was one of the top 10 most searched for persons on the internet in Pakistan and both celebrated and criticised for the content of her videos and posts.During the evening of 15 July 2016, Azeem was strangled to death while she slept in her parents' house in Multan. Read more on Wikipedia

Since 2007, the English Wikipedia page of Qandeel Baloch has received more than 2,622,101 page views. Her biography is available in 24 different languages on Wikipedia making her the 8,641st most popular actor.

Among ACTORS In Pakistan