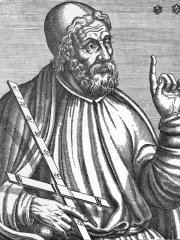 Claudius Ptolemy (; Greek: Πτολεμαῖος, Ptolemaios; Latin: Claudius Ptolemaeus; c. 100 – c. 170 AD) was a Roman mathematician, astronomer, astrologer, geographer, and music theorist, who wrote about a dozen scientific treatises, three of which were of importance to later Byzantine, Islamic, and Western European science. The first is the astronomical treatise now known as the Almagest, although it was originally entitled the Mathēmatikē Syntaxis or Mathematical Treatise, and later known as The Greatest Treatise. The second is the Geography, which is a thorough discussion on maps and the geographic knowledge of the Greco-Roman world. Read more on Wikipedia

Ptolemy is most famous for his geocentric model of the universe, which he proposed in his book, "Almagest." In this model, the earth is at the center of the universe and all other celestial bodies orbit around it.

Page views of Ptolemies by language

Among astronomers, Ptolemy ranks 4 out of 531. Before him are Galileo Galilei, Nicolaus Copernicus, and Johannes Kepler. After him are Giordano Bruno, Tycho Brahe, Anders Celsius, William Herschel, Aristarchus of Samos, Edwin Hubble, Ulugh Beg, and Hipparchus.

Among ASTRONOMERS In Egypt

Among astronomers born in Egypt, Ptolemy ranks 1. After him are Sosigenes of Alexandria (-80) and Timocharis (-320).