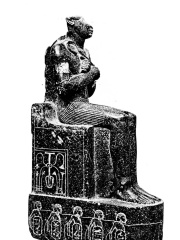 Titkheperure or Tyetkheperre Psusennes II [Greek Ψουσέννης] or Hor-Pasebakhaenniut II [Egyptian ḥr-p3-sb3-ḫˁỉ-⟨n⟩-nỉwt], was the last king of the Twenty-first dynasty of Egypt. His royal name means "Image of the transformations of Re" in Egyptian. Psusennes II is often considered the same person as the High-Priest of Amun known as Psusennes III. The Egyptologist Karl Jansen-Winkeln notes that an important graffito from the Temple of Abydos contains the complete titles of a king Tyetkheperre Setepenre Pasebakhaenniut Meryamun "who is simultaneously called the HPA (i.e., High Priest of Amun) and supreme military commander." This suggests that Psusennes was both king at Tanis and the High Priest in Thebes at the same time, meaning he did not resign his office as High Priest of Amun during his reign. Read more on Wikipedia

Since 2007, the English Wikipedia page of Psusennes II has received more than 108,146 page views. His biography is available in 25 different languages on Wikipedia making him the 4,992nd most popular politician.

Among politicians, Psusennes II ranks 4,963 out of 14,801. Before him are Fidel Ramos, Derviş Eroğlu, Yao Wenyuan, John Bowring, Lucius Antonius Saturninus, and Inukai Tsuyoshi. After him are Ivan Sratsimir of Bulgaria, Labashi-Marduk, Christian August, Prince of Anhalt-Zerbst, Armah, Leopoldo Calvo-Sotelo, and Sumu-la-El.

Others Deceased in 945 BC