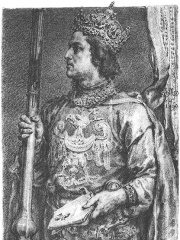 Przemysł II (Polish: [ˈpʂɛmɨsw] (listen) also given in English and Latin as Premyslas or Premislaus or less properly Przemysław; 14 October 1257 – 8 February 1296), was the Duke of Poznań from 1257–1279, of Greater Poland from 1279–1296, of Kraków from 1290–1291, and Gdańsk Pomerania (Pomerelia) from 1294–1296, and then King of Poland from 1295 until his death. After a long period of Polish high dukes and two nominal kings, he was the first to obtain the hereditary title of king, and thus to return Poland to the rank of kingdom. A member of the Greater Poland branch of the House of Piast as the only son of Duke Przemysł I and the Silesian princess Elisabeth, he was born posthumously; for this reason he was brought up at the court of his uncle Bolesław the Pious and received his own district to rule, the Duchy of Poznań in 1273. Read more on Wikipedia

Among politicians, Przemysł II ranks 5,216 out of 15,710. Before him are Ariaramnes, Hazael, Rimush, Rumen Radev, Alys of France, Countess of Vexin, and Hamed Karoui. After him are Stratonice of Syria, Friedrich Wilhelm von Seydlitz, Pompeia, Gaius Vibius Pansa Caetronianus, Jim Garrison, and Ferdinando Carlo Gonzaga, Duke of Mantua and Montferrat.

Among people born in 1257, Przemysł II ranks 3. Before him are Mary of Hungary, Queen of Naples and Frederick I, Margrave of Meissen. After him are Beatrice of Burgundy, Lady of Bourbon and Agnes of Brandenburg. Among people deceased in 1296, Przemysł II ranks 2. Before him is Pope Celestine V. After him are Floris V, Count of Holland, Jalal-ud-din Khalji, Louis III, Duke of Bavaria, Campanus of Novara, and Edmund Crouchback.