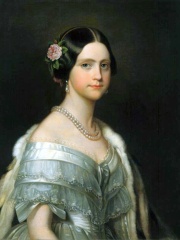 Dona Maria Amélia (1 December 1831 – 4 February 1853) was a princess of the Empire of Brazil and a member of the Brazilian branch of the House of Braganza. Her parents were Emperor Dom Pedro I, the first ruler of Brazil, and Amélie of Leuchtenberg. The only child of her father's second marriage, Maria Amélia was born in France after Pedro I abdicated the Brazilian throne in favor of his son Dom Pedro II. Before Maria Amélia was a month old, Pedro I went to Portugal to restore the crown of the eldest daughter of his first marriage, Dona Maria II. Read more on Wikipedia

Page views of Princess Maria Amélia of Brazils by language

Among noblemen, Princess Maria Amélia of Brazil ranks 313 out of 843. Before her are Amadeus VII, Count of Savoy, Euphrosyne of Polotsk, Rinaldo d'Este, Princess Clotilde of Saxe-Coburg and Gotha, Otto, Count of Savoy, and Emperor Shang of Tang. After her are Henry IX, Duke of Bavaria, Neferirkare Kakai, Frederica of Mecklenburg-Strelitz, William III, Duke of Aquitaine, Queen Noor of Jordan, and Johann II, Duke of Saxe-Weimar.