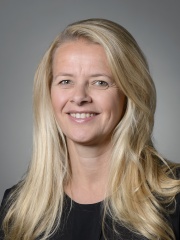 Princess Mabel of Orange-Nassau (Dutch: Prinses Mabel van Oranje-Nassau; formerly Mabel Martine Wisse Smit, born Mabel Martine Los, 11 August 1968) is the widow of Prince Friso and sister-in-law of King Willem-Alexander of the Netherlands. She is a prominent human rights activist, widely known for her roles in co-founding War Child Netherlands, the European Council on Foreign Relations, Girls Not Brides: The Global Partnership to End Child Marriage, and for having served as the first Chief Executive Officer of The Elders, a grouping founded by Nelson Mandela and chaired by Kofi Annan. In 2005, the World Economic Forum recognised her as a Young Global Leader. Read more on Wikipedia

Page views of Princess Mabel of Orange-Nassaus by language