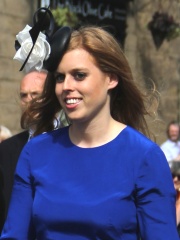 Princess Beatrice, Mrs Edoardo Mapelli Mozzi (Beatrice Elizabeth Mary; born 8 August 1988) is a member of the British royal family. She is the elder daughter of Prince Andrew, Duke of York, and Sarah, Duchess of York. She is ninth in line of succession to the British throne, followed by her sister, Princess Eugenie. Read more on Wikipedia

Page views of Princess Beatrice of Yorks by language

Among noblemen, Princess Beatrice of York ranks 782 out of 843. Before her are Karl Wilhelm, Duke of Saxe-Meiningen, Norihito, Prince Takamado, Charles Augustus, Hereditary Grand Duke of Saxe-Weimar-Eisenach, Zara Tindall, Princess Laurentien of the Netherlands, and Otto von Böhtlingk. After her are Hoël II, Duke of Brittany, Ermengard of Italy, Anna Maria of Mecklenburg-Schwerin, Prince Carlos, Duke of Parma, Laodice IV, and Guy of Thouars.